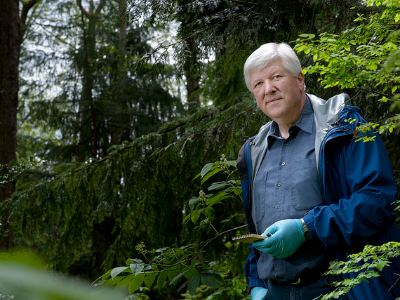 About the presentation:
Since 1986, Rolf has been involved in criminal and other legal investigations, using macroscopic plant remains and microscopic pollen and spores as trace evidence in homicides and other cases, including an indigenous land claim.  His academic background in paleobotany and pollen analysis prepared Rolf for investigations involving the fragmented and small plant parts that often turn up in police investigations.   Rolf will review some basic principles and the history of forensic botany, and then focus on his experiences with some real cases in British Columbia.  His “signature case” is the murder of Heather Thomas in 2000 in Cloverdale, and the role of plant evidence in convicting the murderer.

Rolf Mathewes is a full professor of Biological Sciences at Simon Fraser University, and served as the Associate Dean of Science between 2000 and 2011.  He received a BSc in Biology from SFU in 1969 and a PhD in Botany from the University of British Columbia in 1973.   His research has focused mainly on postglacial vegetation history and climate change in western Canada (especially on the Queen Charlotte Islands, now Haida Gwaii), using pollen and plant macrofossil analysis.  In his academic career, he has been president of both the Canadian Association of Palynologists and the American Association of Stratigraphic Palynologists, and associate editor of the Canadian Journal of Botany and the journal Ecoscience.   Spinoffs from paleoecological research include involvement in criminal investigations as a forensic botanist, identifying and interpreting plant remains in homicides and other forensic cases. He received the 2011 Simon Fraser University Alumni Association award for academic achievement.

Notes: Pre-registration is required. This course will take place online, and recordings will be available for a limited time to participants. Online course log-in details will be sent 24 hours before course date.

Your browser is out-of-date!